After the arrival of the tanker and her escorts, Deep Space Nine was to be the waystation for twenty antimatter storage pods, until the Bajorans sent enough shuttlecraft to take them to the shipyard on the planet. Between the arrival of the convoy and the departure of the last storage pod, he didn't want to think about all the terrible things that could happen.

The door whooshed open, and the cherubic face of Miles O'Brien peered around the corner. You wanted to see me, Constable? Odo's scowl deepened. He despised that obnoxious nickname pinned on him by Commander Sisko, but he would let it pass today. He had more important worries. Yes, Chief. Thank you for coming. 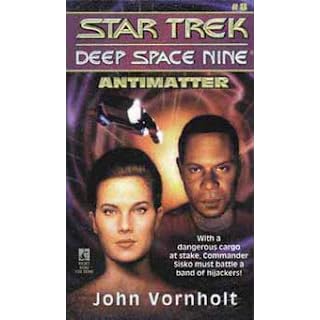 O'Brien strode into the room and stood at easy attention. After a moment, he said with concern, Are you all right? How would you feel if you were in charge of the safekeeping of twenty containers of antimatter? Oh, that, scoffed the chief. Never gave us a lick of trouble. He frowned in remembrance. Well, maybe I shouldn't say 'never. O'Brien chuckled. How volatile is it? Well, let's put it this way—a fistful of antimatter would be enough to destroy half this station.


When he saw that his answer didn't do much to lighten Odo's mood, O'Brien added, But it's perfectly safe, if it's contained. We have ships docking here all the time that have antimatter on board. But we've never had any on board the station, Odo countered.

He shifted in his seat, uncomfortable to be exhibiting so much fear. I've been reading everything I can find about it, and I don't like what I'm finding out. Do you have any recommendations? The chief of operations considered the question for a moment before replying, Only one thing. There's quite a black market in the stuff, because almost every ship with a warp drive needs it. And the storage pods are self-contained—you could take one and leave the rest alone. I'd be more concerned about thievery than an accident.

Thievery, Odo repeated thoughtfully. He stood with determination. Chief, may I buy you a drink down at Quark's establishment? Despite the fact that Director Amkot said he was headed straight for his office, Commander Sisko and Major Kira sat impatiently in uncomfortable chrome furniture for almost half an hour. For the dozenth time, Sisko surveyed the room.

Like most things Bajoran, the furnishings were stylish, even if some of them had seen better days. A double-paned window looked out upon a pair of robotic arc welders, which now sat quietly, their job over. Behind them, one of the gleaming nacelles of the Hannibal was visible, looking like a sleek silver fish. Natural light from above filtered into the immense pit, adding to the underwater illusion.

Amkot's desk looked like a slab of black epoxy, although it was chipped and scratched in various places, as if it had spent several years in careless storage.

His chair looked considerably more comfortable than the one Sisko was sitting in. At least it had padding. A huge diagram of the Hannibal covered one entire wall, and behind the desk were a number of diplomas and citations, all etched on brightly colored slabs. There were blank spaces on the walls, too, where citations had apparently been removed.

More for the sake of conversation than from overwhelming curiosity, Sisko asked, What do you suppose went in those blank spaces on the wall? Kira stiffened in her seat. Commendations, I suppose—from the Cardassians. It's well known that Amkot Groell was a collaborator.

But he managed to keep this facility open, even if they didn't build any ships. He maintained the equipment, waiting for this day. We all had to do unpleasant things, Amkot more than most. He is still resented for it in some quarters. Kira smiled grimly. That depends on how the Federation feels about their new starship. If it brings more business to the shipyards, he'll be a hero.

If it's a failure— She didn't have to finish the sentence. The door opened abruptly, and both Kira and Sisko stood, relieved to finally see somebody. Amkot Groell was a small man, with disheveled white hair that made him look like a mad professor. He was followed into the room by a distinguished older woman wearing a finely tailored suit. The ridges on the bridge of her nose looked like manicured hedges, and she wore a jewel that dwarfed one entire ear. Please excuse me, please!

Just as I was coming here, I heard that Minister Roser was en route. Naturally, I had to meet her. Sisko nodded. This is my first officer, Major Kira Nerys. Of course, of course, stuttered the little man. How are you, Major? It's a pleasure to see you again. The major was a student when she first came here on a field trip, but that was many years ago.

How do you like seeing the yard in operation? Most regrettable. Amkot shook his head with genuine sorrow. We have doubled security, I can assure you. In some respects, it's amazing we haven't had more incidents.